Insights from the UN EGDI 2022 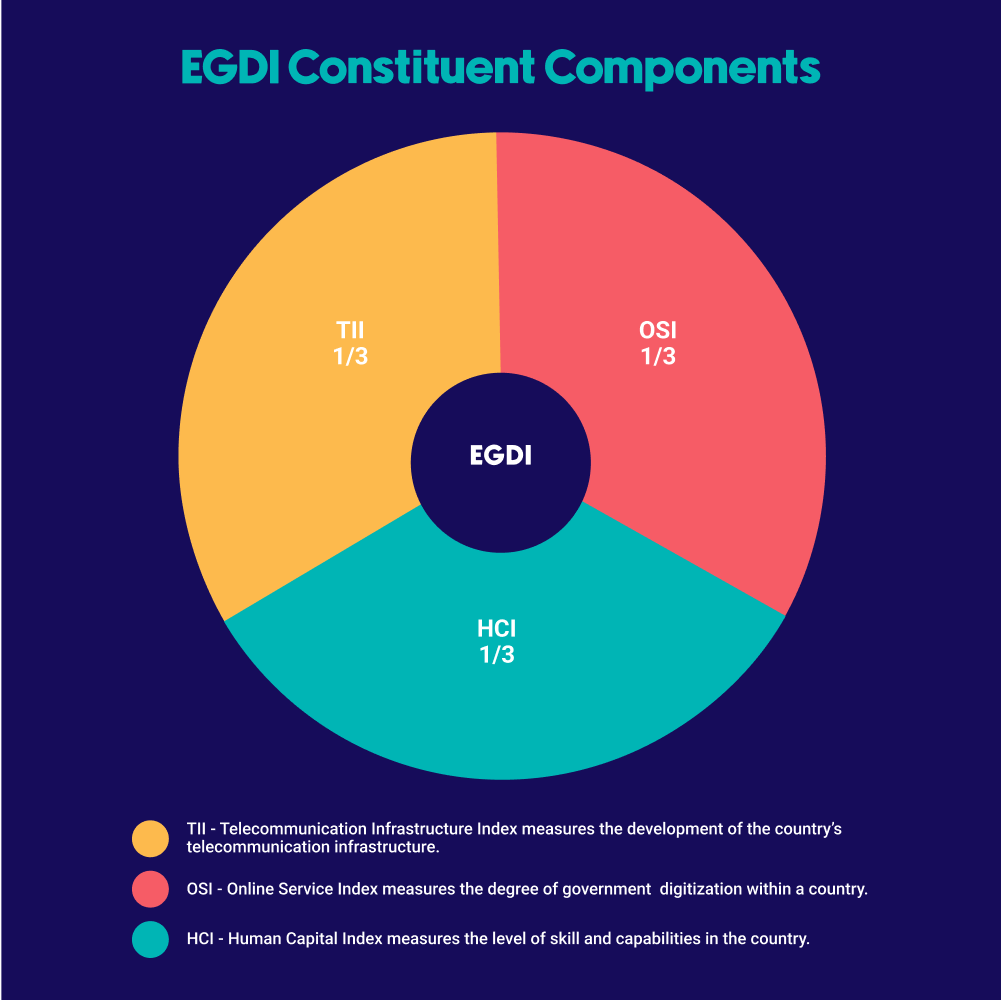 Despite improvement, Pakistan continues to underperform on the EGDI

The average global EGDI score rose by 2% between 2020 and 2022. Two-thirds of the countries covered in the index now fall into the High or Very High EGDI groups.1 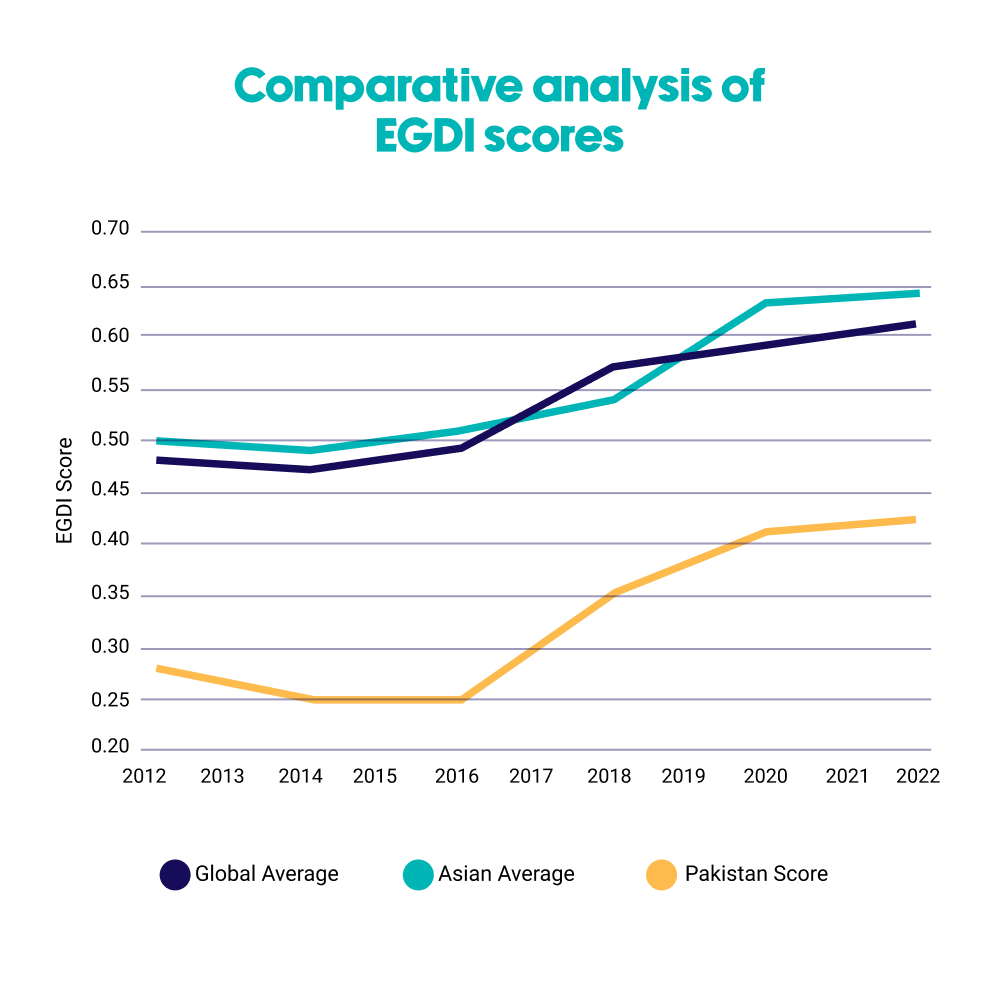 Looking at the region, Pakistan’s EGDI score is 35% lower than the Asian average, placing Pakistan as the fifth worst e-government regime in the region. An analysis of regional EGDI performance over the last two decades reflects the relative progress countries have made towards government digitisation. While Pakistan started off at a comparably strong position, the country’s overall EGDI rank has declined in this period. On the other hand, countries like Bhutan and Bangladesh have shown steep growth, leaving Pakistan behind.

Pakistan’s 13 rank fall in the last two decades – despite a 71% increase in absolute EGDI score – highlights the relatively slow pace of digital government transformation in the country. 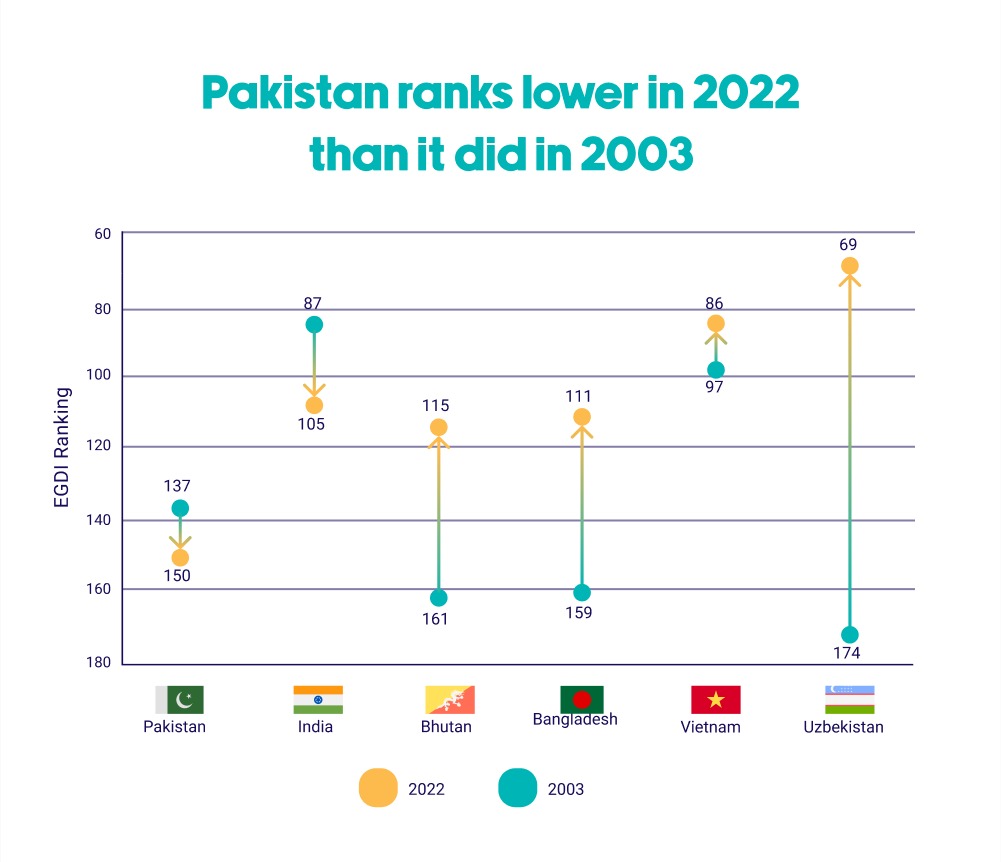 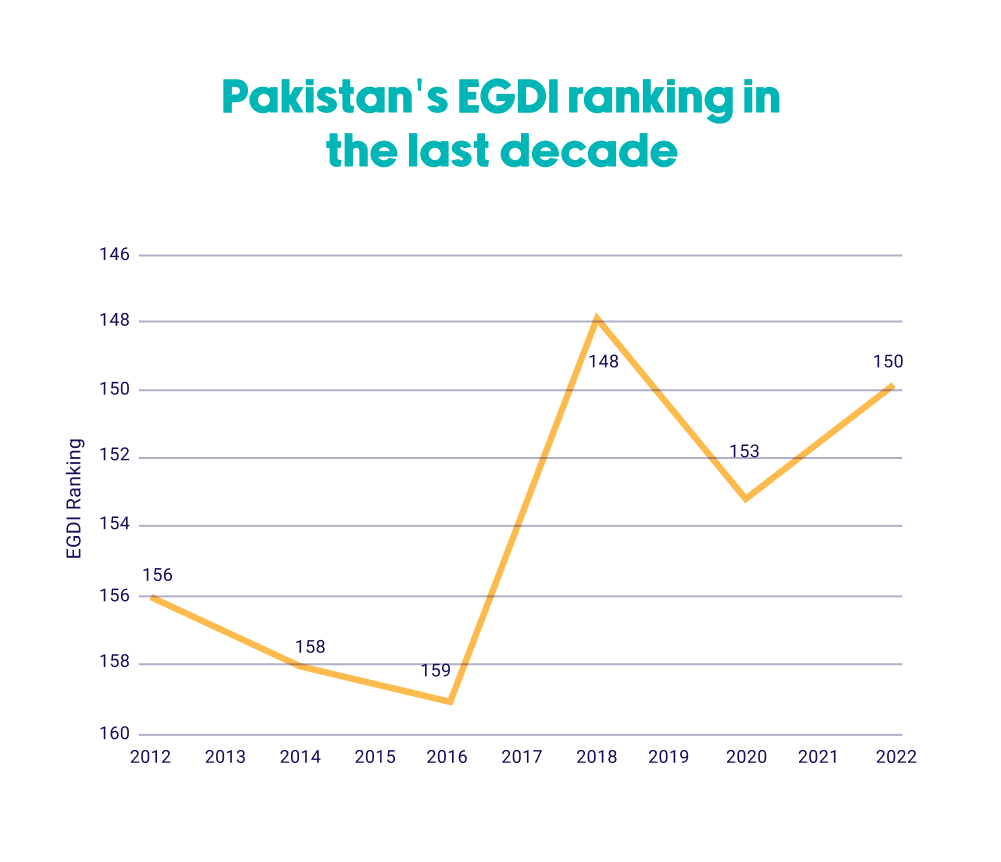 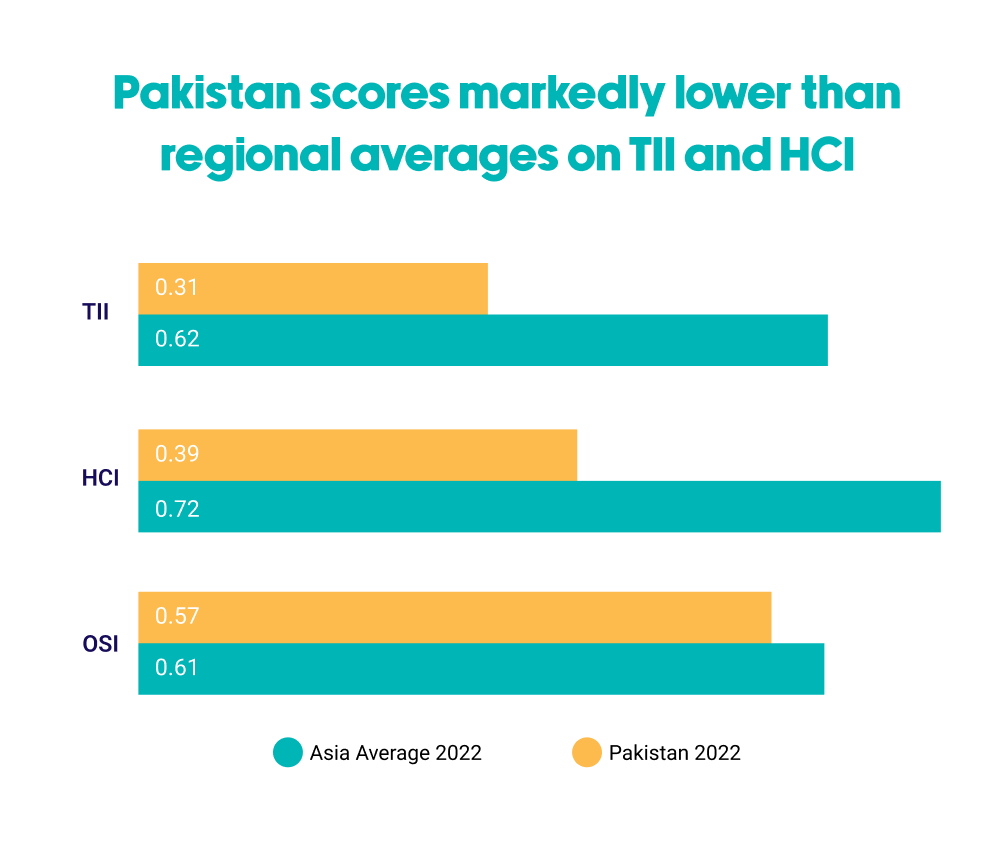 Out of the three components measured on the EGDI, Pakistan’s consistent low performance on TII (Telecommunication Infrastructure Index) and HCI (Human Capital Index) have resulted in a low overall EGDI score over the years. While TII and HCI show the quality of the enabling digital ecosystem, OSI (Online Service Index) measures the provision of public service delivery – the fundamental component of any digital government agenda.

Pakistan’s poor core internet connectivity is reflected in its low TII score – which was almost 50% below the regional average this year. While there are approximately 124 million mobile broadband subscribers in the country, according to the EGDI only 1.14% are active subscribers. This indicates limited access and shallow uptake of internet services.

Interestingly, Pakistan’s rise along the OSI is fairly recent. Until 2016, Pakistan’s OSI scores fell in the low-mid OSI range. However, in the 2018 edition of the EGDI, Pakistan’s absolute OSI score increased by 68%, promoting the country to the High OSI group. This sharp rise reflects a focus towards online government service delivery.

While there has been undeniable progress in digitisation of public services, the high OSI ranking is not accompanied by a corresponding sophistication in integrated digital service delivery. The disconnect between the ranking and user experience is better understood by unpacking Pakistan’s OSI scores. 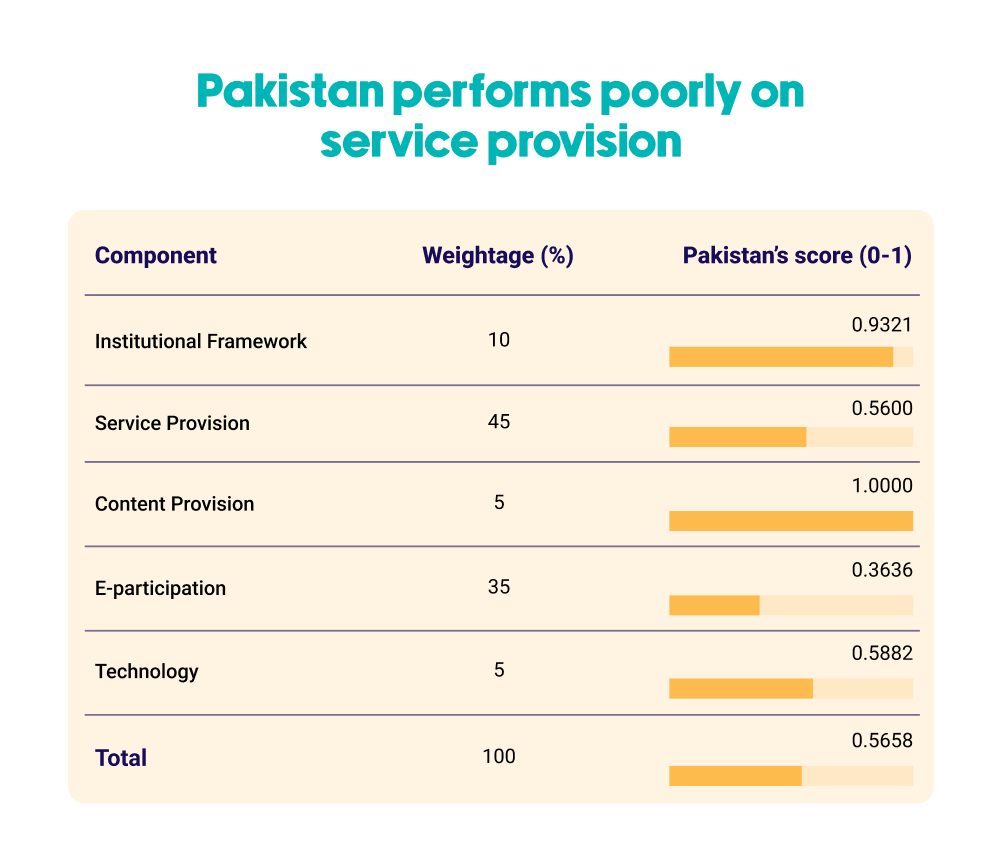 Unsurprisingly, Pakistan performed very poorly across service provision and e-participation. However, a perfect score in content provision, and a high score on institutional framework development, skews the results to create a high OSI score. As such, the OSI ranking does not paint an accurate picture of Pakistan’s e-government ecosystem, failing to adequately capture the sophistication and maturity of digital initiatives.

Focusing on the former has restricted the growth of Pakistan’s digital government agenda, and limited the depth of digital service delivery in the country.

Global e-government leaders, as well as countries that have recently leapfrogged, show that growth in this space is predicated on the shift to a transformational model of e-government one that provides end-to-end digitisation across all stages of service delivery. Regional leaders in the Very-High category on average score 33% more on Service Provision than Pakistan.

Limited focus on citizen centricity: Pakistan’s current digital government landscape has relied on replication of existing service delivery processes reflecting internal government workflows. Inevitably, the focus of government digitisation has been procedural compliance rather than citizen need and ease. An outcome of this is the existing plethora of websites at the provincial and federal level for specific programmes and organisations. In contrast, almost three quarters of surveyed countries have single access points for all government services, such as “gov.uk” and “gov.rw” for the UK and Rwanda respectively, which are designed to optimise user journey for digital public services. Although there has been some provincial level progress with the introduction of the GoPunjab app and KP’s Super App, the scalability and efficiency of these apps remains to be tested.

Pakistan’s predominant focus on complaint and grievance redressal has led to a limited scope for citizen engagement through digital portals, as reflected in the country’s poor e-participation ranking (106). This leads to lower prioritisation of participatory approaches that can seek inputs for planning and implementation of key policies, programmes, and services through proactive digital engagement.

Fragmented and siloed governance: The increased legislative, policy and regulatory activity around the digital agenda in recent years is reflected in Pakistan’s high score (92%) on the institutional framework sub-indicator. However, implementation of these policies remains constrained due to institutional and governance considerations under a federal structure. Although federal and provincial governments continue to develop and grow their respective digital services portfolios, the absence of a coherent and organised national agenda and plan creates a noticeable difference in digital public service delivery across provinces.

Moreover, a lack of coordination and interoperability between and across different departments also leads to data silos, hindering a holistic, seamless experience for citizens. Real progress on the government digitisation front requires horizontal and vertical integration across federal and provincial departments.

Rwanda, a low-income country with USD 720 GNI per capita, ranks 119 (out of 193) on the EGDI. The East-African country serves as a case study for countries with low TII and HCI, since it has progressed positively on OSI owing this progress specially to improved service delivery.

Rwanda’s OSI scores improved by 99% in the last decade. The improvement can be attributed to the country’s proactive implementation of core digital fundamentals vis-à-vis online services provision.

Rwanda’s major successes in this regard include:

Arsala is an analyst at the Centre of Digital Transformation. He aims to bring interdisciplinary methods to research and policy making. Arsala's academic training is in Political Science and History from IBA, Karachi.

This author does not have any more posts.

Hiba completed her MSc. in International Politics from SOAS in 2019 and has 2+ years of experience working as a consultant in the government and public sector. As part of Tabadalab's CDT, her work focuses on developing research and helping different sectors leverage digital transformation for improved economic and social opportunities. Hiba is interested in exploring the intersection between digital and human development, public service delivery, and government. She holds a BSc. in Economics and Political Science from LUMS.

Pakistan Disconnected: Understanding the Fragility of our Mobile Network in the Wake of the 2022 Floods

On August 22, in the midst of the devastating floods that shook...